Unlike many a departed rich man, Kalabari billionaire, Chief Lulu Briggs, did not receive a befitting burial.

Chief Lulu Briggs, died and faded into the night. He went silently and poorly into the deep, dark night. 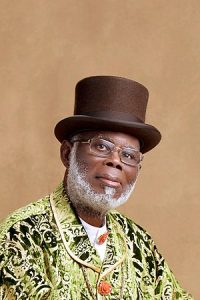 He is yet to be interred six feet under the earth hence he probably wanders dissatisfied, like a tormented wraith seeking peace in unlikely places. Nobody knows the fate of Chief Lulu Briggs but the whole of Kalabari knows that months after he died his body and spirit are yet to be accorded the luxury of a cold, bare grave.

And the reason is not far-fetched; the lingering bad-blood between his eldest son, Dumo – a former Rivers state gubernatorial aspirant under Accord Party and the deceased’s wife Mrs Seinye Briggs over the cause of the billionaire’s death and the content of his Will.

It was gathered that, the content of the Will further escalated the matter as Dumo doubted the authenticity of the Will claiming it must have been doctored in favour of Seinye, who got substantial amount of wealth, while the rest of the asset was left in trust to be managed on behalf of the children and their off springs.

A source further revealed that the late High Chief did not accommodate any of his three older sons in the Will, but stated clearly that they should be taken care of. However, the source added that, it was stated in the Will unequivocally that any of his sons who instigates trouble against his wish should be automatically cut off from the Lulu-Briggs Estate.

However, it was learnt that in the Will that the late statesman expressed his wish to be given a befitting Christian burial and specifically noted that his wife fully be involved. According to the autopsy report carried out by the Military Hospital in Ghana, it stated that the billionaire Oil and Gas mogul died of cardiac arrest after living and managing Parkinson disease for close to two decades.

Meanwhile, a reliable source also revealed that there is a serious crack among the children, Dumo, Senibo and Sofri. Though the incumbent Governor of Rivers state, Nyesom Wike, former governor Peter Odili and the Amanayabo of Kalabari, King J.T. Princewill Amachree, have intervened in the family feud, the warring children have refused to sheath their swords and work hand in hand with Seinye, to give the late High chief a befitting burial as he so desired in his Will.

Interestingly, the said Will was supposed to have been read in April 2019, but Dumo secured an ex-parte order from a High Court sitting in Umoku, Rivers State, barring his late father’s lawyer from reading. Months after, the order was set aside and the Will was read to the family members on July 26.

This has become a source of dissatisfaction and shame to many of his loyalists, particularly those whose rise to eminence was facilitated by the late businessman.

High Chief O.B. Lulu-Briggs,OON, DCF, DSRSS, self-made Nigerian elder statesman, philanthropist, politician, trade unionist and business man was, until his death, the Chairman/Chief Executive of Moni Polu Limited, a company that was one of several indigenous companies that were awarded oil 1992.

He was also a national executive of the defunct National Party of Nigeria. Prior to that he worked at NPA for 23 years, during which he became a renowned trade unionist.

Ford vs. Ferrari: The Real Story Behind The Most Bitter Rivalry In Auto Racing

In the League of Wealthy Men, Femi Otedola is MVP – By Keem Abdul