Even people who normally pontificate with cocksure certainty about politics in Nigeria are mystified by what’s going on at APC right now.

Everyone in the corridors of power that I’ve spoken to was either cagey or just as bewildered as the rest of us.

But I came away with three distinct impressions from my conversations with different people.

First, the current circus show of all-comers’ gladiatorial presidential primary contest in APC has been orchestrated by APC chairman Abdullahi Adamu with the support of a faction of the Aso Rock cabal.

He tells insentient Buhari to invite people to visit him in the Presidential Villa. During the visits, Buhari tells them to run for president and to meet with Abdullahi Adamu, who directs them to buy nomination forms.

People Buhari has advised to run for president often assume that they’re his “anointed” candidates. But it’s an Adamu-inspired scam.

The truth is that Buhari doesn’t have an “anointed” candidate. His only concern is that whoever succeeds him should be someone who’ll conceal his iniquities, who’ll not probe the unprecedentedly stratospheric corruption his regime is perpetrating.

He betrayed this fear, albeit in an indirect way, during his last interview with Channels TV.

“Nobody should ask me to come and give any evidence in any court,” he said. “Otherwise, whoever it is, he will be in trouble because all important things are on record.” Buhari fears being asked to come back to give evidence in court for the corruption he is supervising now.

So, he’s fine with anyone who won’t probe him.

But what’s Abdullahi Adamu’s game plan for swarming the field of contest with an unwieldly large number of contestants?

It looks to me like he designed it to edge out Bola Tinubu whom Buhari and the cabal both fear and despise.

In a fair contest, Tinubu seems more likely than any other candidate in APC to emerge victorious in light of both his enormous war chest and his vast political network within the APC and beyond.

But nobody in the upper reaches of APC’s hierarchy—Buhari, members of the Aso Rock cabal, Abdullahi Adamu, etc.—wants Tinubu to be the party’s nominee. That’s the one thing that unites them.

You only need to study the 9 conditions that the party imposed on its aspirants to know that Tinubu is the target of elimination.

The party said aspirants must sign a “voluntary letter of withdrawal,” and that this must be done before a “Commissioner for Oaths” or “a Notary Public” to make it legally binding.

They must also sign an undertaking to accept whoever emerges as the party’s candidate and to never sue the party in the event that they’re aggrieved by the process that produced the nominee of the party.

This seems to me to point to the possibility of the imposition of a “consensus candidate” for the party.

The party chairman would most probably say that in light of the large number of contestants jostling for the presidential ticket (which he covertly engineered), the party would be bruised if it conducted either a direct or an indirect primary.

There is no unanimity among the cabal who the “consensus” candidate should be, but they’re united in wanting the candidate to come from the South South. Buhari and some members of the cabal are disposed to Rotimi Amaechi, Goodluck Jonathan, or Timipre Sylva.

Nonetheless, the APC also fears that should Atiku Abubakar emerge as PDP’s nominee, they would lose the northern vote (and perhaps the election) if their own candidate is from the South-South.

So, the party intentionally scheduled its convention to take place two days after PDP’s, and asked northerners like Senate President Ahmad Lawan and Jigawa State governor Badaru Abubakar to enter the field of play.

If a northerner emerges as PDP’s candidate, Abdullahi Adamu will most likely impose a northern “consensus candidate” on APC. But if Wike were to win PDP’s primary election, Adamu would most probably choose a “consensus” candidate from either of Amaechi, Sylva, or Jonathan.

I learned that Goodluck Jonathan wanted Adamu to assure him that he’d be the consensus candidate, but the uncertainties regarding the outcome of PDP’s primary contest prevented Adamu from doing so, which has caused Jonathan to pull back.

I think, though, that Adamu is being a tad naïve here. Tinubu is the elephant in the room. The party ignores him at its own peril. If he loses out because of a “consensus” arrangement, he’d most certainly not take it lying down. He is a fierce, ruthless, unforgiving fighter.

A consensus arrangement that gives the ticket to either a South-South or a northern politician might unite Southwest politicians to make common cause with Tinubu to frustrate APC in the region.

Either PDP (if it makes the right choice) or a third party (if the PDP messes up) might benefit from this. 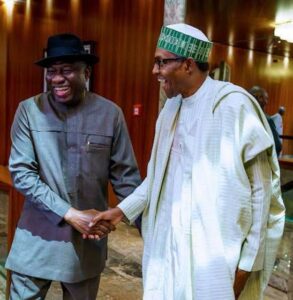