National Leader of the All Progressives Congress (APC), Bola Tinubu, has lent his voice to the protests against violence against women.

In a series of tweets via his Twitter handle Tuesday evening, he described such acts of violence on women and young girls as “inexcusable”.

Tweeting with the hashtags used to protest the rape, murder of some recent victims, he declared that “enough is enough.”

For far too long women and young girls in our nation have suffered the pain, hurt and stigma of gender-based violence and abuse. Too many have been hurt, intimidated and bullied. Too many have died. Such violence is inexcusable. There is nothing that can defend this wrongdoing. 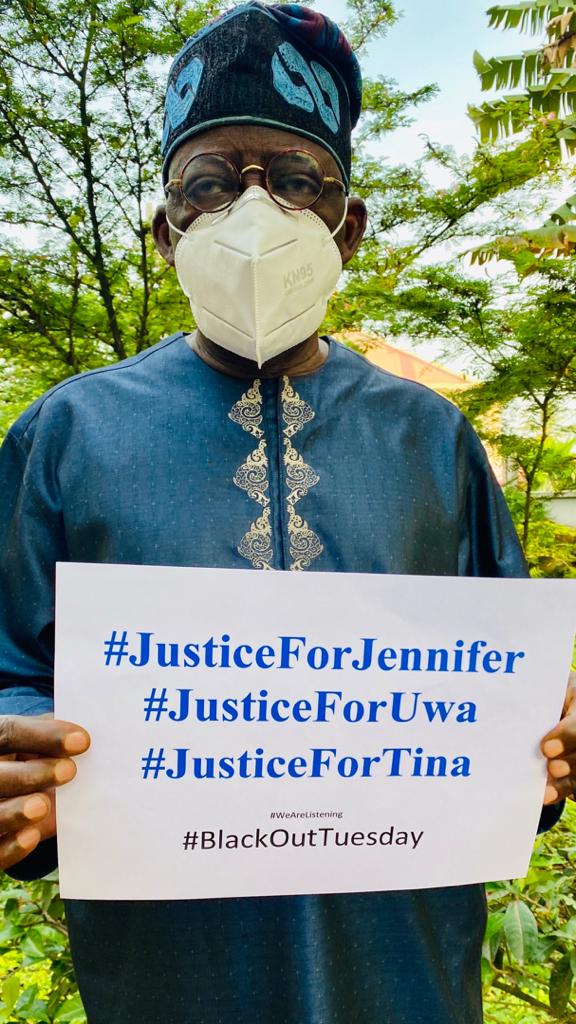 All of us are born of woman and nurtured of woman. Vera Uwaila Omozuwa is the most recent name on a list, far too long, of women who have lost their lives at the hands of these vile criminals. Today, I rise in solidarity with women in Nigeria to say #enoughisenough.

A 22-year-old student of the University of Benin, Edo State, was raped and brutally murdered at a church in Benin City, the state capital.

The Edo State Police Command, on Tuesday, disclosed that a suspect had been arrested.

The Inspector General of Police, Mohammed Adamu, has promised that all perpetrators would be brought to book.

Meanwhile, an 18-year-old girl, simply identified as Jennifer, was allegedly gang raped by five boys reported to be her friends in Kaduna state.

It was gathered that the incident occurred some weeks back in Narayi, a small community in Kaduna South local government area.

The boys were said to have carried out the action on the teenager after giving her a liquid content, said to be a mixture of alcohol and drugs, to drink.

It is understood that two of the suspected rapists have been apprehended while the remaining three boys are currently at large.

The officer was said to be from the Bariga Police Division.

The policeman was reportedly trying to arrest a bus driver for violating the nationwide curfew imposed by the Federal Government to check the spread of the novel coronavirus disease, COVID-19.

Following the outcry her death generated, two policemen, Theophilus Otobo and Oguntoba Olamigoke, were arrested by the Lagos State Police Command for the act.

New Nigeria Collective… A Movement for Good Governance COMMUNIQUÉ ON FIVE YEARS OF BUHARI: THE GOOD, THE BAD AND THE UGLY